As Neuro-Linguistic Programming (NLP) is primarily a method to map human behavior, any human behavior can be mapped in terms of NLP. This differs quite a lot from the idea that anything goes within NLP as, unfortunately, some NLP practitioners seem to think. NLP takes on board anything that works, but that is something different of thinking you can combine anything with NLP. In fact you can combine very few things with NLP without adaption because the presuppositions of NLP in most cases conflict with the presuppositions of whatever someone is trying to combine with NLP. If people would do this, this would create the exact situation Gregory Bateson considered a recipe for schizophrenia: telling people that they must act in a certain way and then punish them when they do. Although modern insights in schizophrenia have departed quite a bit from the ideas of Gregory Bateson, nevertheless it is a very bad idea to try to make people go in two different directions at the same time.

Such bad combinations of NLP and something else are especially unfortunate because there is such a natural and simple alternative that goes to the heart of NLP: rather than combine NLP with something else, you map whatever you want to combine in terms of NLP in such a way that whatever you want to combine with NLP actually becomes part of NLP. This mapping of human behavior is done with what is called a “NLP strategy” within the field of NLP. Unfortunately, many NLP practitioners are badly trained and too uncertain to actually go out and find the strategies that work. Rather they combine NLP with anything they fancy, not realising that this actually hurts NLP even more.

The ABC-Model of Behavior Analysis

So when I realized how valuable the ABC-model is and wanted to use the ABC model with NLP, the first thing I did was to figure out how the ABC-model fits within NLP.  Compared to what I have done in the past with my NLP compatible Neurogram® model, in order to make sure that it was as academically sound as possible, I went one step further and used the TOTE model which forms the heart of any NLP strategy (but is thought up by Miller in Plans and the Structure of Behavior, which is considered a reliable academic source).

All NLP practitioners learn the TOTE model. But only a few realize that NLP strategies are actually made out of sequences of TOTE models. TOTE stands for Test Operate Test Exit. TOTE is one of the first nails in the coffin of behaviorism because Miller in “Plans and the Structure of Behavior” is one of the first cognitivists who leaves behaviorism behind because he sees that human behavior is better understood when you use the concept of an internal plan which behaviorism forbids. Yet, although TOTE has definitely left behaviorism behind it is  still very close to behaviorism compared to modern day cognitivism. TOTE was meant to replace Skinner’s operant in the operant conditioning of behaviorism.

The ABC-model and the metamodel

Furthermore, the ABC-model doesn’t conflict with the main tenets of the metamodel that is used within NLP. The major issue that almost any combination of something else with NLP is that this ‘something else’ violates the rules of the metamodel. Most importantly, this concerns the rule about cause and effect being a distortion of reality. Fortunately, the ABC-model is so defined that the Antecedents are only what happens before the Behavior. And the Consequences are only what happens after the Behavior. Nowhere there is any suggestion of cause and effect. The ABC-model is a pure time sequential model that makes no claims about cause and effect. In fact, Rietdijk in “Organisaties Conditioneren” explicitly makes the point that behavior analysis works perfectly well if all we do is only talk about covariance and never about cause and effect.

This doesn’t mean that actual behavior analysts don’t mention cause and effect. They do and hopefully they learn from ABC-NLP that such cause and effect talk is a bridge too far and that they stop using cause and effect statements and restrict themselves to covariance talk only.

Here is a graph that our coaching and training app creates to keep track of coachees and trainees and praise them for doing things rightly: 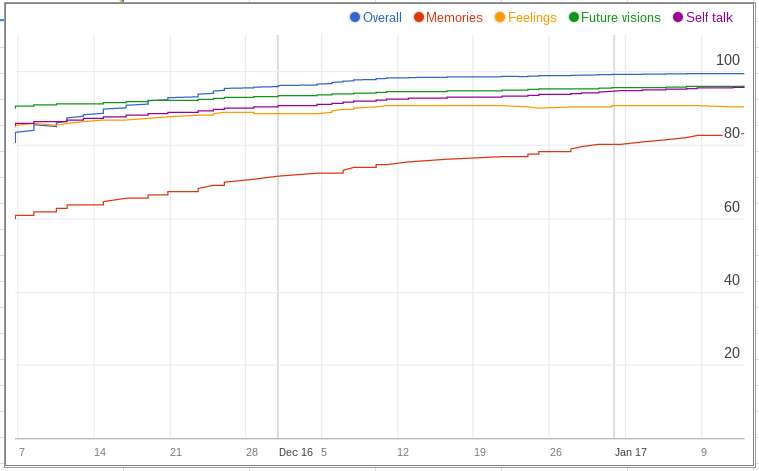 The results of ABC-NLP with a trainee

(We track four different results: how do you feel, how do you deal with the past, what are your future expectations and how is your own self talk. This coincides with the Kinestetic, Visual and Auditory modalities in terms of NLP.)